“Wait you mean they couldn’t get Jason Kidd for Andrew Bynum? Bynum? Who’s that kid anyway”?

Kobe Bryant reacting as to why the Lakers wouldn’t trade Andrew Bynum for Jason Kidd during the 2007-08 season…. “Smush Parker was the worst, he shouldn’t have been in the NBA but we were too cheap to pay for a point guard so we let him walk on”……Real stand up isn’t it?

Kobe ‘Bean’ Bryant is an extremely talented player, has won many accolades, and is a lock for the Hall Of Fame. He has a silky smooth jump shot, athletic drives to the basket and sometimes he’ll surprise you with a rim rocking dunk which is seldom seen as opposed to his earlier years when he could jump out of a building (age, injuries, and minutes have taken it’s toll). Theres virtually nothing he can’t do on the court offensively. His top 5 highest scoring totals in a game are 61 vs New York Knicks, 62 vs The Dallas Mavericks, 65 vs Portland TrailBlazers, and an insane 81 vs the Toronto Blazers. Defensively he’s a wizard: 12 All-NBA Defensive 1st team selections.

Over the years he has been at war with coaches and teammates but then on the other hand his supporters say he just has a fierce desire to win and be THEE greatest player of all time (not to mention tie or leap frog Michael Jordan’s six NBA titles (Kobe has five) before all is said and done). So now becomes the debate:

Is Kobe a petulant whiner who is oppositional when he can’t get his own way? Or is he a fierce competitor who just wants to win?

As I mentioned earlier, Kobe has been in many disputes with teammates. Most notably Shaquille O’ Neal, Dwight Howard, Pau Gasol and coaches Phil Jackson and Mike Brown. Whether anyone realizes this or not, Kobe Bryant is the equivalent of the spoiled entitled child who gets everything his way and has everything handed to him early, but when he faces adversity, throws temper tantrums and hissy fitts.

Kobe  came in to the NBA at age 17 and learned his craft under a good coaching staff on a veteran team with Shaquille O’Neal in his prime.  The Lakers became a dominant force once again winning 55+ games and winning three NBA championships from 1998-2002. In the midst of this, a rift formed between the two and soon it became Jackson’s war as well. In his [Jackson’s] book, “The Last Season A Team In Search Of It’s Soul” he even called Bryant “uncoachable” and told Lakers management, “One of us has to go”.

Now what does that tell you when Jackson, who coached Dennis Rodman and Jordan (not exactly a model teammate himself – I recommend the book: The Jordan Rules, fantastic read), comparatively had little trouble with them? Soon after the departure of them both (Shaq via trade, Jackson hiatus) the Lakers went into a downward spiral missing the playoffs in 2005 (just the 3rd time in 30 years) and losing in the first round of the playoffs in ’06, and ’07. Phil Jackson came back at this time and it still wasn’t good enough for Bryant. He wanted more, claiming he needed help which led to his ‘stop at nothing’ approach to publicly chastise teammates both in the media and on the court.

He bashed Kwame Brown, Smush Parker, and most famously Andrew Bynum in the infamous parking lot video cam. He’s orchestrated trades and got two coaches ‘let go’ by the Lakers. And as a teammate on the court, you don’t want to make one mistake otherwise be subject to his ‘I’m gonna kill you’ stare.

There was even an ESPN documentary on Kobe Bryant in 2009 which Spike Lee directed. One scene showed Bryant joking with teammates while they bore the most uncomfortable look on their faces as if he was hamming it up for the cameras.

Now don’t get me wrong, Brown and Parker aren’t great players. Not even good to be honest. But as a leader, you utilize their talents and if there is ever a problem with a teammate, you keep it in house. I could not understand the attitude because the team wasn’t/isn’t performing up to standards, yet Kobe….you WON three rings by the time you were only 24. Yes, YOU Kobe. And it’s not like you gave back some salary to get some good players. In hindsight the Lakers won two more titles in 2009, and 2010 but I digress.

Now while you’re complaining and talking about help, what about Patrick Ewing, Reggie Miller, John Stockton, Karl Malone, Charles Barkley, Dominique Wilkins, and Chris Mullin, not just stars, but Hall Of Fame players who never won ONE?  These guys will never be able to sit with their grandchildren one day and show them the bling on their fingers. Not to mention some of them didn’t even make it to the NBA finals with their respective teams.

You should be happy to be put in a position to have early career success. And you complained of needing help. Why bash your teammates publicly? Aren’t you supposed to be the leader? Your current feud with Dwight Howard isn’t helping matters. You’re telling him “he needs to play harder”. If he were healthy, absolutely. I’m sorry he only has a torn labrum, and had back surgery 8 months ago.  Are you telling me you’re the only player who wants to win?  No one else does?

The bottom line is, Kobe wants to be the alpha dog and he’ll never thrive with another superstar. The Lakers are currently 26-29 and three games out of the 8th spot to make the playoffs. In the past there have been games where he has taken too many shots and not deferring to teammates.

Although his supporters would point out he has carried the Lakers on many occasions, what about times when he’s double or triple teamed and forced up shots? This was evidenced in the playoffs last year vs the Oklahoma City Thunder.  He attempted 129 shots to just 17 assists and they lost in the best of seven series 4 games to 1. He also shut down and didn’t shoot at all. Most infamously in game 2 of the ’07 playoffs vs the Phoenix Suns where he attempted just 6 shots and scored six points in the final three quarters. They also lost that series 4 games to 1.

Check this clip of Kobe’s not-so-subtle verbal jabs, and this view of his not so model citizen-like behavior.

So with that being said, you decide. Is Kobe a good teammate who has an insatiable appetite to win or is he a petulant whiner when things don’t go his way? The floor is yours. 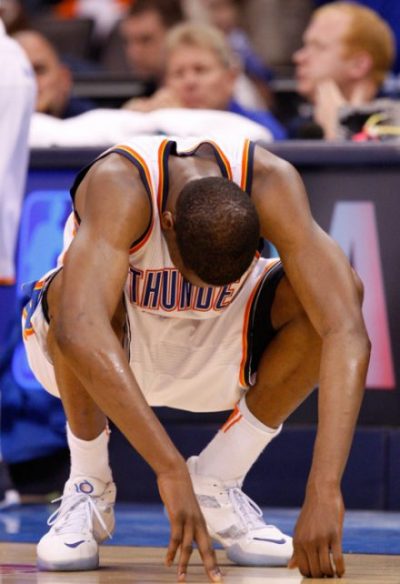