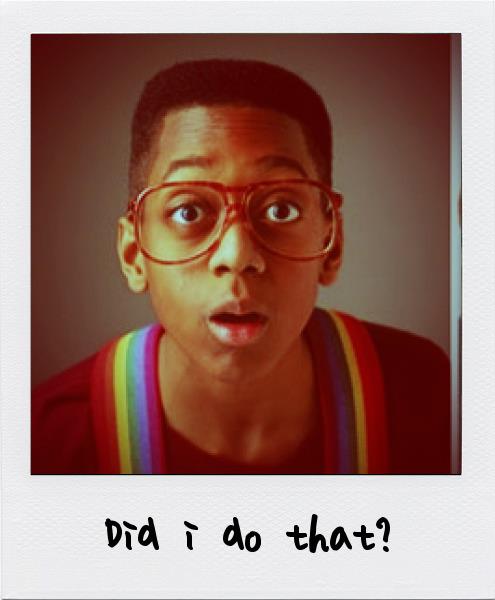 Here we go with this second installment of Social Hiccups Men Must Avoid. Now I know the title says men but here are some for the ladies as well; although it would be wise for the fellas to pay attention because yall be doing some crazy nonsense. So here goes.

1. ATTEND A PARTY EMPTY HANDED, THEN LEAVE WITH PLATES OF FOOD

Now I know there have been some instances when we are notified of a party or gathering at the last minute and we don’t always have time to stop at the store; that happens. If it does, do not expect to make plates or a plate for that matter to take home. You didn’t bring anything, don’t take anything back. You not only look cheap but greedy as well. And we all know how quickly word spreads about people and you don’t want to be known as that dude (or woman). If all else fails, at the very least bring a bag of ice. You can never go wrong with a bag(s) of ice.

2. PLAYING R&B WITH YOUR BROS IN THE CAR

Now I know this can be flexible. For instance if you and your dudes are going to a club or wherever, and you’re picking them up with the music already playing, cool. I personally would turn the volume to a level where you can still hear it [music] while engaging in conversation. Now, if you are playing something different or aren’t playing anything at all and you decide to pop in a 112 CD, or switch your IPod to the R&B playlist, that’s a little…..I don’t know. If you like R&B like myself and it’s your wheels, hey do whatever. Just don’t pull no R-Kelly “Sex Me” or Ginuwine “Pony”. This has gotten quite a few people in trouble, most notably NFL star Quarterback Brett Favre (a married man at that). I would never, ever, recommend you doing this at all. Why, you may ask? No matter how much you think you’re packing, the next female has more than likely seen bigger. And if you’re really coming up a little short, forget it. You will be the laughter of your circle and not to mention how many other females she’ll send it to; or worse, social media can come into play. So unless you are a horse don’t send these pics. You know what? Forget that. The only way she sees it is in person.

4. MAKING LOVE TO YOUR GIRL AND GOING TOO FAR

Allow me to explain. Imagine you and your lady are really getting into it. I mean headboard banging, bed squeaking, hair puling, all that. You are so into it, you decide to talk dirty to her. You’re saying all the sexual catchphrases and you slip up and call her a bi***. “Take it bi***. Yeah you dirty bi***…”. You get the point. You’ll probably get slapped and there goes your nookie for a while. Now some women may like that sort of thing, but to be on the safe side, don’t do it. So you’re out and about throwing them back and chillin with the fellas and you decide to get brave. We all have at some point done something we regret while we were inebriated. I can almost bet for some of you this was it. You pull out your phone, check your phone book and see the first girl’s name that comes up and proceed to text her some dumb ish. Whether it’s your woman, female homie, or worse, a family member…if you’re already wavy, try avoiding texting anyone because if you say something stupid and you hit that “send” button, it’s too little too late.

We’ve all been there. No one’s watching right? It’s dark outside right? My boy is covering for me right? Well let me answer that for you, “Wrong, wrong, and wrong”. Five words: Sex Offender lewdness in public. If you’re caught by the police that’s what you’re looking at. Quite a few states have implemented that rule so be careful. You don’t want your face plastered in the sex offender database just because your bladder was full. Its messed up but true. You know what,… I won’t even get into this one because too many young boys (celebrities and athletes too) out there dressing like they don’t give a damn. And the sad thing is, it’s become totally acceptable. I will say this though: white socks with dress pants and dress shoes is a no no. Rocking wife beaters with man-boobs is also a no no.

8. CALLING OUT SICK AND GETTING CAUGHT WHILE OUT

There have been stories of employees calling out sick so they can run errands, go to a game, or even attend a championship parade. I don’t condone it, but if you’re a sports head (like me, although I would not do this), different strokes for different folks. Let me say this though, don’t get caught on tv while you’re there. You can easily lose your job, and in this economy many of us can’t afford to do so.

Thats it for part 2 of the Social Hiccups Men Must Avoid. So people, what are some others you can think of? Ladies/gents, what are some social hiccups women must avoid? Tell us. We wanna know.