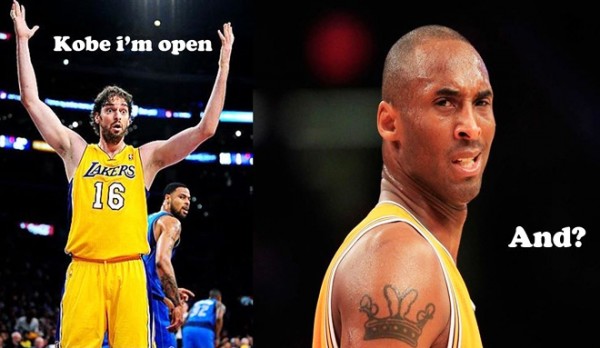 “Kobe Bryant’s wrath hasn’t just been felt by the front office this season. His poor teammates have certainly not been spared, according to Nick Young:

Nick Young shares Kobe Bryant’s recent trash talk: “I don’t talk to players on teams that are 20 games under .500.”

I wrote an article on Bryant last season questioning whether he was a good teammate or petulant whiner. Well he’s at it again, this time chiding his teammates for having a losing record. I’m not going to go into another Kobe rant but that quote says it all right here. You know what… I will rant one more time (I think).

The bottom line here is, yes he is a bona-fide Hall of Famer, a supremely talented player but what gives him the right to chastise his teammates? But Kobe, even if you were playfully joshing, who are you kidding my brother? It’s not as though he’s playing, or they’re loaded with stars who are vastly underachieving or even well coached for their skill set. One day karma is going to come back and bite you (Kobe) in the a$$, and it’s going to get a huge chunk of them cheeks. Pause.

Mr. Black Mamba you do realize last season your team signed a 38-year-old Steve Nash (who will be going to the Hall of Fame but even in his prime was a black hole on defense); and Dwight Howard who was only a few months removed from back surgery. Might I add, it seems as if his best days are behind him. Despite doing well in Houston, with his size and athleticism he should be among the most feared players in the league a la’ Shaq in his prime, but I digress.

And Mr. Mamba, you were recently paid 90 million for 3 years. Did you defer any of that salary to bring in star players?  No. Do you work with any of the young players on the team with their moves and plays? Most likely No. Are you patient to see what they’ll do in the off-season, since you can’t even contribute on the court anyway? Nope. Well maybe during that time, the Lakers will find a new pacifier for Bryant and change his diaper so he can stop crying.

Lastly, I have a small request: call up Reggie Miller, Patrick Ewing, Chris Mullin, Karl Malone, John Stockton, Dominique Wilkins, and Charles Barkley. I’m sure you have all their numbers. Ask them how many title rings do they have and then look at your fingers (half of which have bling), and then realize what a spoiled brat you’ve become.

So OM readers, what are your thoughts on Kobe and his attitude? His comments? Am I wrong for feeling this way? Let me know.